I have been asked to write a brief commentary on the organization of the North Texas Region, and on the picture taken in front of the Hilton Hotel which was first published on the cover of the December 1973 Issue of Classic Reflections.

The idea of a North Texas Region was conceived in 1972. Fred Tycher and Hubert Cook were, as I recall, the two people who conceived and promoted the idea of a Region centered around Dallas-Fort Worth, which could have Saturday or Sunday afternoon activities which could be driven to comfortably. An afternoon activity in Tulsa or Kansas City was not likely to draw many North Texas area cars or people. Weekend-long activities at that distance had drawn good attendance, but many enthusiasts claimed they were getting older (or was it lazier?) and the idea of an all-day drive to get to the starting point of a tour was becoming less attractive. Gasoline shortages were also a factor.

Fred, Hubert, and several other members who worked just as hard, put together an initial meeting on August 13, 1972, at Flag Pole Hill at White Rock Lake. The organization was named the North Texas Classic Car Association, with the intention of applying immediately, upon establishing a sound organization, for status as a provisional region of CCCA. This was a ticklish situation, as we did not wish to offend our many friends in the Oil Belt Region, some of whom felt that the Oil Belt Region would be weakened. The North Texas group was admitted as a CCCA provisional region as hoped. The picture in front of the Hilton Inn was taken just after admission as a full Region, before the very first Board meeting as a full CCCA region. A day to celebrate! 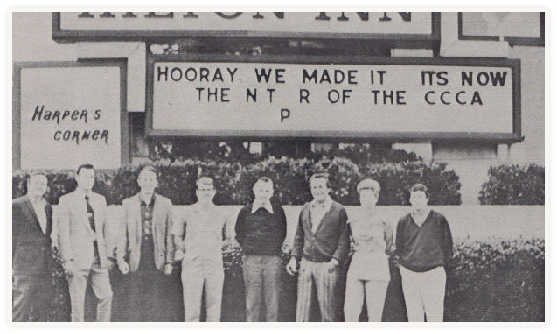 The North Texas Region was off to a great start. It was a success from day one, due partly to the large number of established classic car enthusiasts and CCCA members who were ready-made members, but mainly due to the hard work of a number of “early” members. The North Texas Region has given us much enjoyment. It will continue to do so, so long as we continue to work to make it do so. It is wonderful to have so many “early” members still so active in the club, but our ability to attract new members will be the life of a continuing organization. To all of those who worked to organize the North Texas Region, and to those who are now making it work, a sincere “Thank You.”

About
The Roadmap
Copyright © 2022 Classic Car Club of America: The Texas Region. All rights reserved.