From Your Regional Director

Thanks to the hard work of our activities director, Bill Downs, we had a strong start to the fall driving season.  Continuing the trend he started earlier this summer by sometimes having a tour following our monthly breakfast, in August we went to Don Yount’s racing car museum in North Dallas. The Yount team has successfully comropeted in the IMSA endurance series for several years and currently runs an Audi R-8 in the series. The museum houses a wide range of significant racing cars.

In September we returned to two of my favorite collections in North Texas—David Disiere’s eclectic, beautifully housed and ever-changing collection and Angelo Mendez’s collection of Packards.  I could very easily live in the man cave at David’s, especially if some of the cars were at my disposal to drive.  His focus has settled on European and pre and post-WW-II classics and they are nothing less than spectacular.

October took us to Mike and Joy Ames for our traditional Not So Grand Classic and Debutant Coming Out Party.  It was a record turnout of members and cars as we all enjoyed the opportunity to socialize after 18 months of social distancing. The following weekend many of us participated in the Westlake Car Show, which has evolved into a really nice local show. More about this later.

Finally, in October we experimented with a change of venue for our breakfast.  Unfortunately it was less than totally successful.  The plan was to meet on Lower Greenville for a breakfast at the Avenue Sports Grill.  The morning was beautiful and we had a nice turnout of cars and members. I had been assured they would promote the event in the neighborhood, and there was indeed a sizable turnout of folks interested is seeing our cars.  But the promised plan to take our orders and get us served promptly did not happen, for which I apologize.  If we ever go back there, rather than going to Avenue Sports Grill, over which I have no control, we will go to Charlie’s 504, where I do (or think I do) have some influence since it is managed by my daughter.

Thanks to the hard work of both Bill Downs and Bill Kimball we will once again have our Annual Meeting at the Dallas Country Club.  This has been the location of the Annual Meeting for a number of years and is very popular with our members.  Please note that lunch will be served at 1:00.  Our final activity (other than the November breakfast on the 27th) is our Holiday Party on December 5 at the Warwick Melrose-Dallas, which is the new name of the Melrose Hotel.  The location on Cedar Springs Ave. is central for our members and they have been very accommodating of our needs, including special parking for our classics.

We have been discussing hosting a Grand Classic for two years but have been put on hold by the pandemic.  We are now looking to have one next October, in conjunction with the Westlake Car show.  The Marriott Hotel would be our headquarters.  We will have a separate area adjacent to the Car Show area, but the public will be able to enjoy both. We have not begun negotiating with the Marriott, but they have a significant relationship with the town and I’m confident it will be a great venue.  We are mindful of the need for adequate parking for the rigs of those who plan on trailering their cars.

As I write this, in two weeks we will have a new board of managers. I want to thank those of you who have worked with and helped me during these most challenging of times.  I especially include Bill Downs, Bill Kimball and Bill Mott for our activities.  In my opinion we have one of the stronger regions in the CCCA, with a nice range of activities and good attendance. Stay safe and have a Happy Thanksgiving and Merry Holiday Season.

Following our breakfast in September we enjoyed a change of pace by touring Don Yount’s racing car museum. Don’s garage contains a wide range of significant cars and motorcycles going back to 1922. He and his team have most recently successfully campaigned an Audi R-8 in endurance races at Sebring, Watkins Glen, Road Atlanta and the 24 hours of Daytona, among others, under the Performance Tech Motorsports banner.  The link between these cars and those of the Classic Era is direct and palpable. Henry Royce entered his first cars—even before the Silver Ghost in 2007– in endurance and speed races.  Stutz advertised it was “A car that made good in a day” due to its success in the very first Indianapolis 500.  And in recent years we have seen Bentley successfully return to Le Mans—the scene of W.O.’s early success.  You can tell from the smile on her face that Lisa feels quite comfortable in the driver’s seat.  But what are all of these buttons on the steering wheel?  And not one says “HORN!”

Tour of the Collections of David Disiere and Angelo Mendez

Following our breakfast in September we drove to Southlake to tour the collections of David Disiere and Angelo Mendez.  With the dispersal of Paul Andrews’ collection in Fort Worth several years ago, David Disiere’s collection has grown both in size and the significance of the cars to be perhaps the most important in North Texas.  For CCCA members it is notable for the rare European Full Classics®–Delage, Delahaye, Talbot-Lago and Rolls-Royce and an incredible 1948 Cadillac cabriolet with coachwork by Saoutchek.  But these are joined by an amazing range of post-war classics.  Porches, Mercedes, Jaguars, Mustangs and more.  David and his wife, Teresa, have become well-known for their philanthropic endeavors and this has spilled over to his willingness to share his car collection with those of us with similar interests.

As eclectic as David’s collection is, Angelo Mendez has a much more focused collection, consisting of a single marque—Packard.  His collection not only includes a number of Full Classics,® but other pre-war and post-war Packards as well.  We are used to seeing Angelo’s cars at shows like Westlake, but was a pleasure to see the entire collection at his garages.

Social Events — 10/9/21—Not So Grand Classic and the Unveiling of the Debutants.

After 18 months of few activities and masks and social distancing, everyone was ready for one of our most popular annual events—the Not So Grand Classic at Mike and Joy Ames’ lovely home in Arlington. It seems like every year Mike has something new and interesting for us to see.   This year was no exception, as he had two years since the last NSGC to add new garage space and new Full Classics®.  Once again, he did not disappoint us.   The day dawned bright and full of sun–perfect weather for dozens of Full Classics,® both debutants and a number of old friends, as well as a wide range of special non-classics displayed on the lawn.

After socializing and enjoying our lunch we moved on to the important part of the event—uncovering the Full Classics® which are new to our region since the last NSGC.  And this year we had a bumper crop.

A 1937 Lincoln V-12 coupe with LeBaron coachwork owned by Mike and Joy Ames.

A stunning Rolls-Royce Phantom II Newport with left hand drive coachwork by Brewster, owned by Bob Burr.  This car was notable for its French Marchal headlights.

A 1931 LaSalle dual cowl phaeton with coachwork by Fleetwood, owned by Brady Richards.

For over 20 years Mike and Joy have generously hosted this event.  The setting could not be better.  We owe them a great deal of gratitude for their dedication to the region.  It takes a lot of time and effort to put on this event and it remains a highlight of our calendar.

Note, there will be no breakfast in December as the 4th Saturday is Christmas. 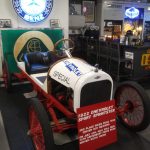