The Texas Region Christmas Party and Annual Meeting Sunday, December 9th, at Abacus Restaurant at 1:00 p.m. Come early to visit. Bring your Full Classic® or other interesting cars. There is secure parking on site.

This is the same restaurant we met at last year. There will be a special menu, with each paying their own bills at the meeting. We do need to have a head count for them by SATURDAY, DECEMBER 1, 2018.

New directors and officers will be introduced. Ballots will come out separately; be sure to return them as requested.
Abacus is located at 4511 McKinney Avenue, Dallas, Texas. It is just west of Central Expressway, one block south of Knox, using the Knox-Henderson exit.
Respond no later than December 1, to Steve Chapman

One of our own Full Classics® is on view at the Dallas Museum of Art. Mike Ames’ Cord is part of the exhibition “The Cult of the Machine” Precisionism and American Art. Cult of the Machine examines American culture from the 1910s to the Second World War and reveals how the American love affair with new technology and mechanization shaped architecture, design, and the visual culture of the United States. The exhibition runs until January 6th.

Picnic at Robin and Frank Guy’s

This year’s rainy weather did not keep CCCA and Packard Club members from enjoying Robin and Frank’s hospitality.

Some of our members entered or attended the very soggy “Park Place Luxury and Supercar Showcase”. Keith Smith took second place in the “American Classics” Class. His was the only Full Classic® car in the class. Best of all it did not suffer damage from the intense rain.

At the “Not-So-Grand Classic”, Al Kroemer announced that the Texas Region took second place for the Membership Award in the CCCA Regional Awards.

We can all help the club with membership by taking every opportunity to introduce people to our Classic® cars, especially those younger people who show an interest. And maybe we need to prod some of those people we know who have Full Classic®, or similar cars, but think they just don’t want to join a club. Invite those people to an event so we can win them over!

The rains stopped for the Not-So-Grand and we all found room to park on solid ground at Joy and Mike Ames’ lovely home. We had 3 debutantes this year.

The Not-So-Grand would not be complete without the “Special” awards.

1. If all the planes are grounded and you need to cross the country FAST, which car would you take?

Winner- Mike Ames’ Oldsmobile with the Rocket 88 engine. Reason, rockets are faster than planes. BUT, Joy Ames insisted the award go to Bob Wood’s Ford GT 40, because it is truly fast.

2. Which car could stand in for the witch’s broom on Halloween?

Winner-Mike’s Oldsmobile Toronado. Reason, it looks like it would be fast going forwards or backwards.

3. Which of the cars would you want to use to round up those dougies in the old West?

Winner-The 1910 Buick. Reason, it would be easy to lasso those dougies with no windshield.
Honorable mention- Chandler Smith’s DeSoto, because its windows crank out for the lasso.

4. With all the rain we have had, which car would double as a life raft?

Winner-Mike’s Chevy Corvette Split Window Coupe. Reason, if you turned it over and made it a boat you have a window to view the fish. 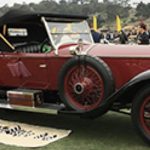 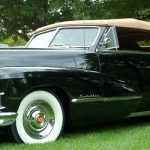