From Your Regional Director:

It is time to look forward to both a new year and a new decade. We are fortunate that the Texas Region remains strong—indeed one of the CCCA’s strongest regions. We have had active and involved members who have assured we have a number of interesting activities each year, which give our members something to appeal to almost any interest. The monthly breakfasts have been an important source of comraderie for those in the Dallas area. Unfortunately our region is too large to support events in other parts of the State. But that is a problem for almost all regions. It is, however, a reason why we should strive for at least one overnight or two-night tour to areas where our more remote members might be able to attend.

Bill Downs has a great lineup of activities this year, beginning with the garage tour of the Hildebaugh collection in Waxahachie on January 25. We will not have our regular breakfast that Saturday. Our annual Chili Cookoff will move to March this year and we are again privileged to have this at Ray Kinney’s hanger at the Addison Airport.

There are three national events this year that you should strongly consider attending. The annual meeting in Valley Forge, PA will include tours of several important collections, including the Bulgari and Simeone museums. This will be followed by the Canadian CARavan, coordinated by Ray Giudice. Ray always puts on a first-class event and this will be no exception. In October Tom and Connie Jones and the Indiana Region are coordinating a CARavan in the Lexington, KY area. Several of us were on their last CARavan and it was great fun. It is a hub and spoke CARavan, so there is no packing up and moving every day or two. The Blue Grass area is beautiful and the driving leisurely—perfect for our cars.

I look forward to seeing everyone in Waxahachie and on the road!

In early December we had our Christmas lunch at Jasper’s Uptown. With the lovely weather a large group of members drove their Classics©, or other special interest cars, making the parking lot look great. The food and friendship were wonderful.

New Board members are Al Kroemer and David Oberle. Bill Kimball is serving another 3-year term on the Board

Thanks to Chandler Smith, Keith Smith and Bill Kimball for their last 3 years of service.

The Texas Region Board of Directors has sent a letter to the CCCA National Board stating our feelings on the future of our club.

Here is a copy if you did not see it in an email.

Members of the Board

RE: Expansion of automobiles recognized as Full Classics®

I am writing this letter on behalf of the Texas Region Board of Managers of the Classic Car Club of America.

When our club was formed, the oldest recognized classic was 26 years old and the newest a mere 9 years old. It would be like a group of car enthusiasts today discussing the merits of a 2010 Cadillac or Mercedes. It took many years for the club to recognize cars made between 1946 and 1948 which were substantially identical to their pre-war counterparts. And even this was somewhat of a fiction since there is little commonality between a 1939 Rolls-Royce Wraith and a 1946 Silver Wraith beyond the name “Wraith.” Many more years passed before we recognized cars made before 1925 which were substantially identical to their 1925 counterpart—a move so logical it defies explanation why this wasn’t done decades earlier. And, of course, we have now recognized cars that meet the definition of a Full Classic® manufactured after 1914, but not the identical car made in 1914 (go figure!).

For many years there have been discussions about why the club has not progressed by accepting cars made through the 1950s and even into the ‘60s. We understand this has recently become a topic of discussion in many forums within the club. The club is facing an imminent existential threat. It must be addressed now—not 3 or 5 years from now. Most immediately, it is financial. The club has accumulated financial deficits in excess of a half million dollars over the last 6 years. We learned just last week at the meeting in Hershey that we are likely to, again, have an operating deficit of perhaps as much as $50,000 this year—partially offset by contributions of $20,000. That is not a sustainable path. Membership continues its inexorable decline in spite of the numerous efforts the club has made to address this problem—a problem faced by almost all social organizations and certainly, all car clubs. While we are not foolish enough to believe that expanding our reach through the ‘50s and ’60s is a panacea for our membership or financial challenges, it most certainly is a step in the right direction.

We are well aware that there are a handful of members who would rather see the club fail than to take this step. And we will be surprised if you do not hear from a small but vocal chorus who will threaten to leave if the club expands its reach. This is a mindset to which the club cannot afford to capitulate. This is our club—all of us—not just the handful of members who oppose change. Far too often the response to far too many proposals to improve the way the club does things is that: “But that’s the way we have always done things.” What a lame excuse for inaction!

When the board was discussing the Chrysler Town & Country, more than a handful of members said that if we recognized these cars, not only would it not increase our membership but that they would not renew their memberships, resulting in an overall decrease in membership. Well, we brought them in and, sure enough, a handful of members followed through on that threat to leave. Conversely, we gained a number of new members (over 50)—primarily because one board member made it his mission to bring them in.

fearful of the naysayers that they declined to even ask the members about their attitude towards bringing in later cars. Hopefully the current board will exercise more courage and put this to a vote. We believe it will carry by a significant margin.

antecedents but which clearly meet the definition of a Full Classic®, save the year in which they were manufactured. Bentley Continentals and Flying Spurs, Chrysler Ghias, Continental Mark IIs, Cadillac Eldorado Broughams and Biarritzes come to mind immediately. Bringing them in would, if the board believes it appropriate, also allow us to incorporate separate pre-war and post-war divisions where some CARavans could be limited to pre-war cars while others focus on the go-fast post war aficionados.

We understand there have been discussions regarding bringing in more

models from the classic era, like the Packard 120 and perhaps the Lincoln Zephyr. There also appears to be some discussion of accepting cars made after 1948 which are substantially identical to those 1948 cars we currently accept. We are not opposed to these modest steps. But neither of those will result in significant numbers of new members. More directly, neither of these opens the club to a new generation of cars that meet the definition of a Full Classic®, but for the year in which they were made. If we took cars made through 1969, the newest classic would already be 50 years old. If we made the cutoff 1959, it would be 60 years old. Recognizing these later classics is the right thing to do. And it allows us to appeal to a different generation of automobile enthusiasts.

For as long as discussions have been held regarding recognizing more cars (the Lincoln Continentals, Cadillac Series 62, Auburns, and Chrysler Town & Country, for example), the detractors have said that bringing them in would not result in more members. Not only is this counter-intuitive, it is counter-factual. Look at the directory and see how many members own these cars and only these cars.

We very much look forward to the board at long last addressing this issue. 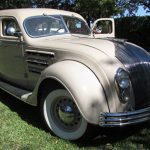 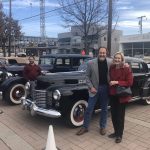